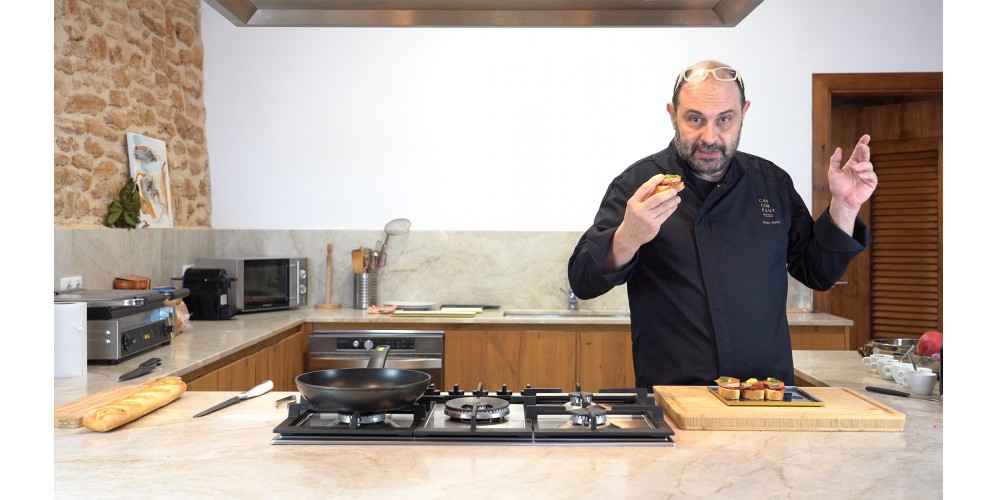 Xesc Reina, master charcuterie maker, inventor of flavours and troublemaker in the sometimes "anti-progress" world of charcuterie, is unique in creating good products with skill and intuition. He is an exceptional creator of flavours with a lot of creativity and courage.

Since April 2015, he has been wearing the uniform of Can Company, where he combines his imagination with deep-rooted Mallorcan tradition. Craftsmanship and creativity go hand in hand to create recipes that are as impossible as they are simple, tasty and honest.

Under the protection of Can Company, Xesc preserves and respects the culture while rediscovering products and flavours, some of which had been forgotten and others yet to be revealed. He researches the history of Majorcan cuisine and tries to retell it in different words, but with the same essence.

Xesc's cuisine is rowdy, flashy and at times delirious. His creative charcuterie has dared to gut the Majorcan black pig (porc negre) and add colour to it, and with success.

He reinterprets cuisine and takes nothing for granted, fleeing routine and boredom, bringing colour to tradition and believing that quality and a good product make all the difference.

Talented and charismatic, he was considered the man who whispered to the Sobrasadas. At Can Company, we were told that he doesn't just whisper to them, but that he understands them, listens to them and thinks about them. He is patient with their time, their habitat and their needs.

-A sobrasada is what I breathe - he once told us.

His sobrasadas, which have their own name and are raised as if they were his own daughters, therefore exude flavours that can transcend boundaries. Thanks to his ingenuity, Can Company uses colours, flavours, textures and contrasts.

Talking to him is an experience. He is funny and charismatic. His enthusiasm is contagious and his love of cooking more than visible.

He bubbles over with passion for his profession, for the product, the tradition and the avant-garde. He is aware that there is no growth without innovation. And he is determined to prove it.

We will undoubtedly be there to see it.